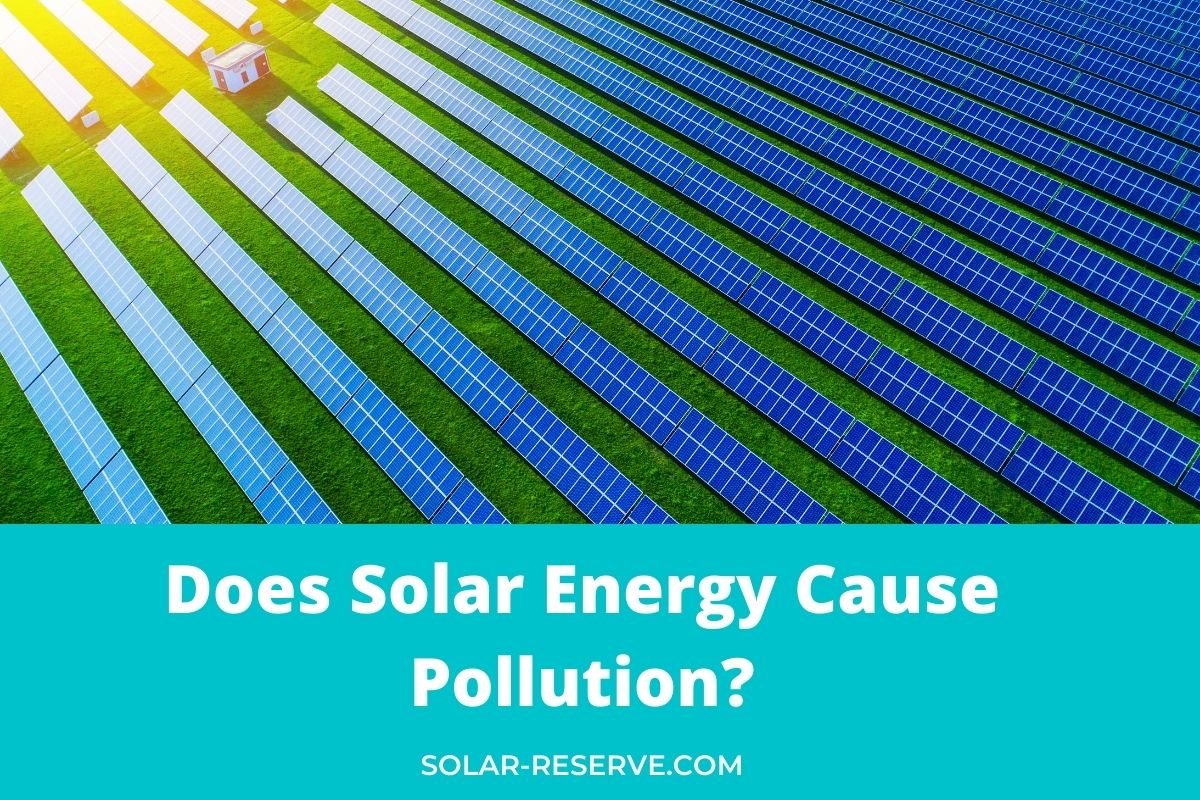 Solar panels are exciting and all, but how many of us are ready for a two-sided conversation? Although they aid in the battle against the fuel crisis, they do pack their drawbacks. In this article, I’ll be answering a long lingering question, “does solar energy cause pollution?”

Conventional methods of producing solar energy do not necessarily cause much pollution. But the environment still can have an impact. Ecological, land, soil, and water damage can become noticeable if solar energy practice is not properly supervised.

This discussion against the setbacks of practicing solar energy production can be quite debatable. Thus, I have tackled this issue head-on and have decided to write an open-ended article that will thoroughly discuss the topic at hand.

I hope this article will clear your doubts once and for all regarding any questions about solar energy causing pollution!

In easy words, no, they do not necessarily cause any pollution directly. But the production of solar panels in factories contributes to some amount of pollution. Although this does not deduct their effect on the environment, they still are a far better alternative than other conventional methods of energy production, which cause tons of pollution!

Let’s get back to school quickly and discuss how most solar energy works. Having a quick recap can better help us understand why solar energy has little to no contribution to the production of greenhouse gases.

In textbook English, solar power is the conversion of solar energy into electricity, which is implementable directly through the use of photovoltaics (PV), or indirectly through concentrated solar power, or through a combination of the two. They also use lenses, mirrors, or solar tracking devices, to focus a large area of sunlight on a narrow beam.

These solar plants usually do not produce any gaseous products that are harmful to the environment. They also mitigate the environmental implications of combustion utilized in fossil fuel power generation, such as greenhouse gas emissions and other air pollution emissions.

Solar panels also produce very little waste, which is much lower than any other form of energy production. That ensures that land and water resources experience the least pollution possible.

But it is not some magical method that is completely clean. Solar panels do need to be produced in a factory that contributes to various types of pollution. And for mass-energy production, a lot of land needs to be occupied.

But when you weigh the pros against the cons, solar panels do make up for the small amount of pollution they do end up causing.

If we are considering the damages solar wastes can have on the environment, then no, solar energy may not come across as being fully green. A lot of factors also come into play. This varies in a lot of ways as the fabrication of the panels necessitates the use of caustic chemicals, water, and power which can harm the environment. It also produces toxic wastes.

However, this isn’t a topic that can be said without considering tons of factors that come into play. Hence, I will be talking about how solar systems can harm the environment if they are not properly implemented. Nonetheless, none of the negative effects that they may have stripped away the advantages they ultimately have!

Let’s begin with the manufacturing of Solar Panels.

On the other hand, some types of Photovoltaic (PV) cells use harmful substances and chemicals. Whenever solar panels are not properly maintained, these haphazard chemicals could leak and wreak havoc on the environment. However, that is nothing but a possible scenario if people are not careful and neglectful.

However, although solar panels are now considered a one-time investment due to how long they usually last with proper care, there are plans that solar panels can be recycled.

As industrial and technological practices break new bounds, scientists and solar companies are looking at more economical methods of coming up with a sustainable means of production!

Semiconductor processing often includes the use of hazardous chemicals to generate solar-grade silicon. Depending on the solar panel manufacturer and country of origin, these chemicals may or may not be disposed of correctly.

As in every sector, some companies provide a good example, and others make corners to save money. Not every corporation will dump chemicals or fail to properly recycle its leftovers, but there are a few bad apples out there. Thus, there may be instances where improper disposal of solar waste can nastily affect the environment.

Lead, cadmium, antimony, and other harmful compounds are frequently found in solar panels. These substances are not removable without disassembling the entire panel. Approximately 90% of most PV modules consist of silver, tellurium, and indium. Recycling solar panels with PV modules can also cause hazardous damage when they are improperly disposed of.

Just like the large-scale implementation of any other power plant, a large area of land is needed. This is to make room for thousands of solar panels. Clearing large hectares of land or practicing active deforestation can hinder the livelihoods of animal habitats and native plants in the long term.

Water is also used in high amounts to clean up solar panels and cool down individual turbine generators. The usage of too much water daily can harm the natural water reserves meant for use by the habitats and plants. All this can badly affect an active ecosystem around solar panels.

However, this effect is non-existent when solar power plants are constructed in desert areas. This not only will provide an abundant supply of sunlight but will also minimize the ill effect large-scale solar plants can have on the environment.

As long as producers of solar panels are responsible, this problem can be effectively tackled. The same can be said for most of the persisting problems listed above!

Why Solar Panels Do More Good than Harm

There is no real collective data or any research analysis made on the effect solar panels have on the environment in the long run! Most of the damages listed above happen due to improper utilization of solar waste or not planning in terms of sustainability. Hence, most of the environmental damages are preventable!

As previously mentioned, the environmental damage that solar panels may induce on the environment can be avoided or slowed down with proper practice.

This can manifest in many ways, starting with conservative practices of producing mass solar panels. Nonetheless, the advantages of owning solar panels outweigh the disadvantages by a long mile!

Here are a few pointers on how solar panels do better for the environment than harm subjectively!

That pretty much covers our whole take on the question, “does solar energy cause pollution.” In direct words, they don’t; however, due to a few mishaps by producers and solar power practitioners, a few instances do exist where the environment was harmed.

Nevertheless, the damage they seemingly cause does not come close to the good they do! I hope this article has educated you with the proper knowledge that you might have been seeking. The environment indeed is a precious thing that should be protected, and solar panels deliver their purpose in protecting it almost flawlessly!

Do Solar Panels Work At Night?