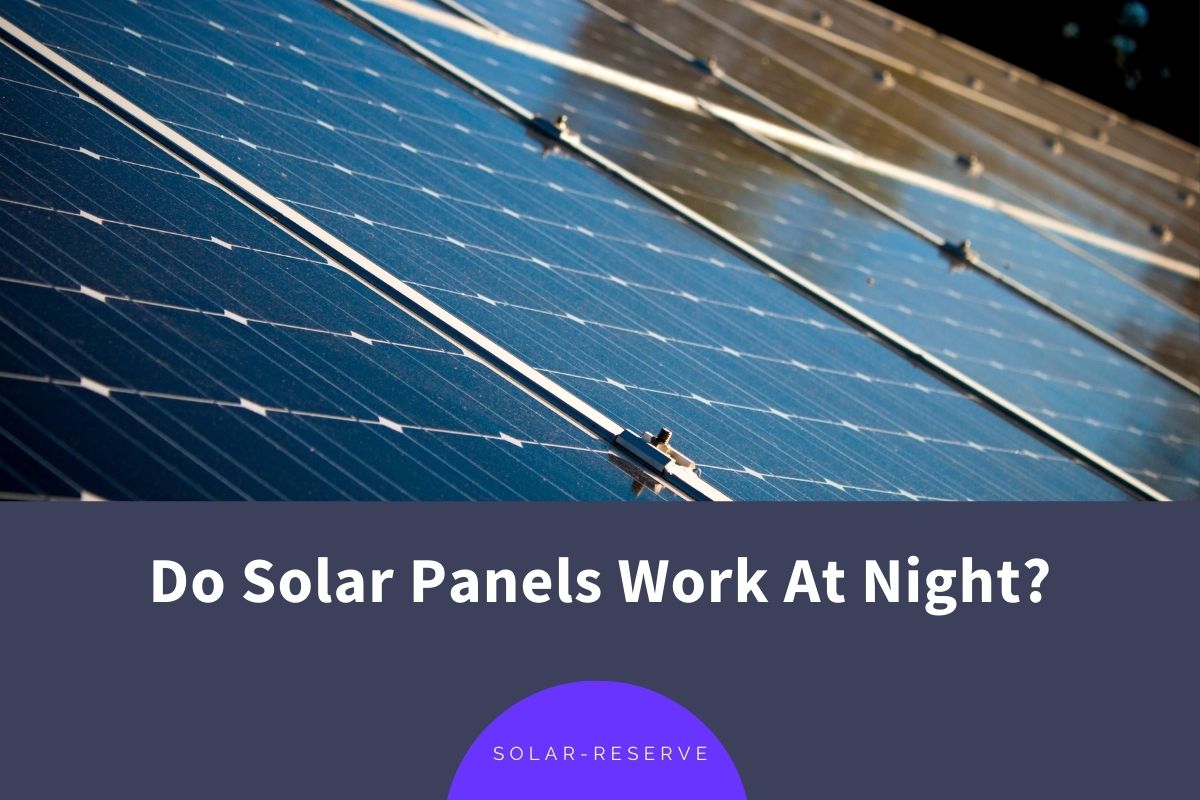 Solar panels have taken the world by storm. Recent studies show that in 2019, the US surpassed 2 million solar installations. By 2023, we can expect this number to increase by two folds!

Unfortunately, many people are unaware of how exactly solar panel systems work to produce electricity. Many people wonder whether these solar panels work at night or on cloudy days when there is not enough sunlight.

If you are one of them, you have come to the right place! In this blog, we will aim to provide answers to all your questions related to solar panel systems so you can make the most of them.

Do solar panels work at night? Solar panels DON’T work or produce energy at night. This is because they are made of photovoltaic cells (PV cells), which only produce energy in the presence of the sun. Since there’s no sunlight at night, PV cells can’t absorb or convert it into energy using a solar panel system.

However, at night, PV cells can absorb light energy from other sources such as the moon or street lights, but the output produced in this case is very low and usually insufficient to power an electrical appliance, let alone an entire house. As a result, solar panels become inactive at night and dive into sleep mode until dawn when the sun rises again.

You might have seen off-grid homes and factories that have an energy supply at night and wondered, ‘how are they functioning when it’s dark outside?’

How exactly do solar panels work?

As discussed earlier, a solar panel comprises many small units called photovoltaic (PV) cells. These cells capture the heat and light from the sun and convert sunlight into electricity. A solar panel contains a large number of these cells.

These cells allow the particles present in sunlight, called photons, to release electrons from atoms, which in turn creates a flow of electricity.

Manufacturers make photovoltaic cells using mostly silicon or thin-film. These cells are in the shape of a sandwich, and in order for the process to work, each side of the sandwich must be charged positively or negatively.

An electric field comes to life when two opposite poles in a magnetic field have opposite charges. This electric field must be established for the photovoltaic cells to work.

The electric field dictates the direction of the flow of the electrons towards the metal plates that line the cell. This flow is what we call the energy current, and the strength of this flow dictates how much electricity each cell can produce.

The electrons are then collected into wires through metal plates on the sides of the cells, and hence, the battery turns them into usable power that can flow as any other form of electricity.

The solar panels create direct current (DC) electricity, and this must be converted to alternating current (AC) electricity as most buildings and appliances use this form. The inverter is in charge of this conversion, making the electricity ready for everyday use.

The inverter then transfers the electricity to the breaker box. You can then distribute it through the building as per your requirement. The solar panel then becomes ready to power all home and factory appliances through the use of just sunlight!

How are homes with solar panels powered at night?

As we mentioned before, solar panels do not produce solar energy at night due to sunlight’s absence. Since there is no light source, the cells don’t absorb energy after dark. This makes many people wonder how homes and factories that use solar panels work at night without the solar energy production process taking place.

A primary characteristic that makes solar panels popular and reliable is their ability to produce extra energy during the day while the sun is shining bright. This excess energy provides sufficient power after it gets dark and keeps electrical appliances running at night. But how does this happen?

When the solar panels absorb more energy from the sun and produce more electricity than needed, the surplus electricity does not go to waste.

Instead, solar panel manufacturers ensure consumers can power their homes and businesses during the night with the help of their solar panel systems that conserve the surplus energy. This is possible through2 methods:

The idea of storing the sun’s light and energy is not new. For decades, people have been trying to store and hold on to the energy in sunlight to convert it into electricity. You can store energy from the sun in 2 ways:

Most manufacturers design solar panel systems in a way that they produce more energy than your home or factory requires while the sun is out. They come equipped with solar battery solutions to store energy.

At night, when your solar panel systems are in sleep mode, you can use the energy stored in the solar battery to power your house or place of work.

Most customers who have solar battery storage options live completely off-grid as their panels produce sufficient energy to last them all day. They do not require power from the grid and hence, do not incur any electricity bills!

Another way to power your house at night is to attach solar light sensors, panels, and a battery to your electrical appliances. This is not an ordinary person’s job, and most electrical appliances do not come with built-in pieces of equipment. However, if you just want to turn on lights during the night, this is a viable solution.

Install solar lights around your house. These lights are readily available in the market and work on a simple phenomenon: the solar panels capture the sun’s light during the daytime. The solar energy is then converted into electricity. The battery stores this energy for later use.

At night, after the sun sets, the light sensor recognizes that it’s dark due to an inadequate amount of sunlight and automatically starts using the stored energy to power the LED lamps in the solar light, lighting up your house in the process.

However, if you want solar lights to work, you must ensure that you place them where direct sunlight hits the panels during the daytime.

Net metering is a fairly new yet popular way to use surplus solar energy produced during the day at night for solar panel system users that do not have battery storage options.

You can export the excess power produced by your solar panels during the day to a utility grid in net metering. When you supply this power to the grid, you receive credits that accumulate in your account.

Then, when it gets dark, you can use power from the grid to work your appliances and use your previously-stored credits to balance the cost of energy.

In simple words, the net metering method lets you store the monetary worth of the excess electric power produced by your solar panels on the grid, which you can use later to reduce or eliminate your electricity bills altogether.

The “Anti-Solar Panel” system: A solar panel that works at night

According to a research paper published in 2019 by Jeremy Munday, a professor at the Department of Electrical and Computer Engineering at UC Davis, and his colleagues, a newly-designed solar panel system that works at night might change our entire outlook on this eco-friendly, renewable form of energy.

Scientists are calling this system the “Anti-Solar Panel” system. Munday developed this system keeping in mind that the demand for electricity will rise in the next 10 years due to the rising popularity of electric cars and gadgets, changes in lifestyles, increase in pollution demanding a switch from combustion fuel, and more awareness of solar energy panel systems. The “Anti-Solar Panel” system will work in an opposite way than the present solar panel systems.

Researchers have manufactured these “Anti-Solar Panels” using thermo-radiative cells, which work on the notion that an object which is hotter than its surroundings will emit heat as infrared light.

Thermoradiative cells will generate electrical current as they emit infrared light or heat in the cool space. This principle can be used for producing power with the help of solar cells at night.

“A regular solar cell generates power by absorbing sunlight, which causes a voltage to appear across the device and for current to flow.

In these new devices, light is instead emitted, and the current and voltage go in the opposite direction, but you still generate power,” Professor Munday said. “You have to use different materials, but the physics is the same.”

While solar panels do not produce energy or work at night, we can still use the surplus energy they have during the day by storing it in a solar battery or using the net metering method.

Both approaches allow you to rely entirely on solar energy to power your home or business. However, the development of “Anti-Solar Panels” will take time as further research and experimentation are required before these panels hit the market.

We hope this article helped you find the answer to your question “Do solar panels work at night?” If you have any further questions, please leave them down in the comment section below, and we’ll get back to you as soon as possible!

Can Solar Panels Be Recycled?