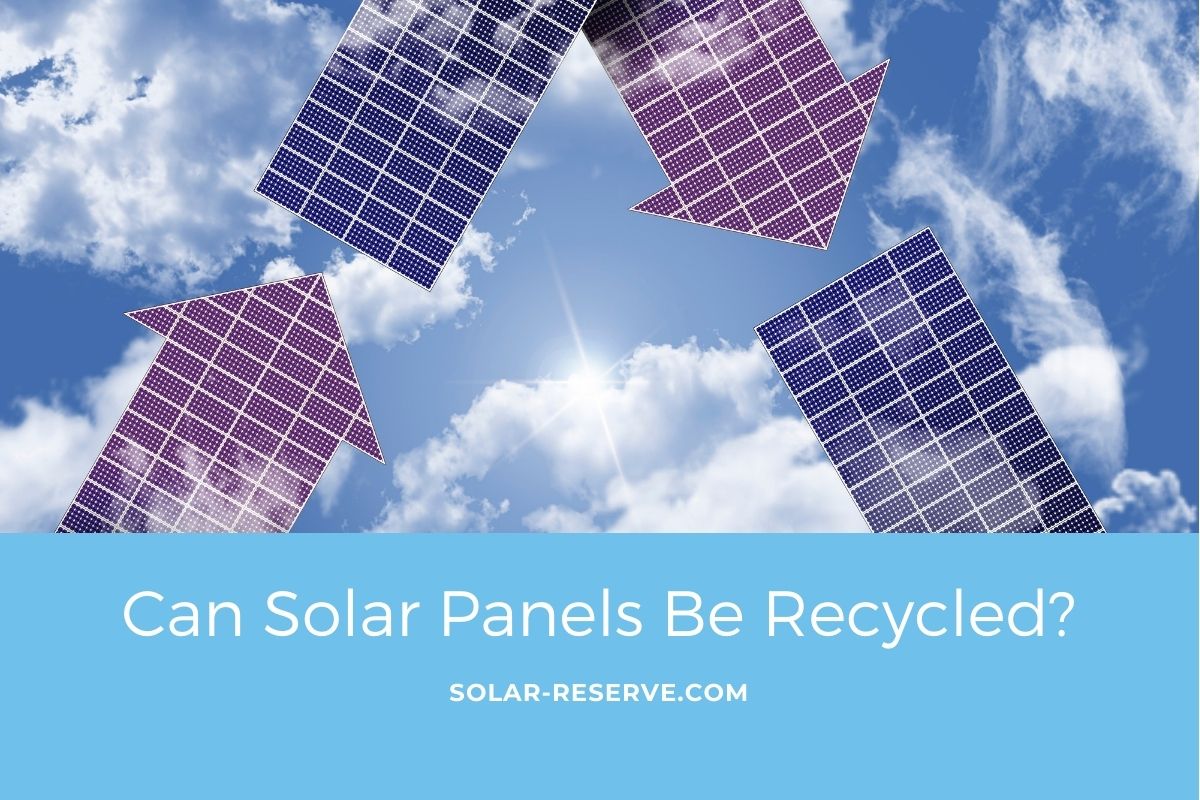 Solar power, a renewable energy source, is the fastest-growing source of new energy. According to the International Energy Agency (IEA), in 2017, renewable energy accounted for two-thirds of the energy added to the world’s grid, with solar technology shining the brightest. However, the panels that generate all this energy do not last forever.

A typical solar panel system has a lifespan of about 20 to 25 years. After this time passes, the ability of the panels to capture sunlight reduces. Since solar panel systems gained popularity only in the last decade, many of them are still functioning. But what do you think will happen 15 to 20 years later? Researchers expect that by 2050, solar panels will produce around 60 million tons of waste!

This brings us to a very important question: can solar panels be recycled? Yes, solar panels like every electronic device can be recycled. Solar panels are made up of the following raw materials: aluminum, plastic, glass, silicon, and metals. The recycling industry recycles all these raw materials in mass quantities. Hence, it is possible to recycle solar panels as well.

According to the IEA, by 2050, recyclable materials in old solar panel systems will be worth $15 billion in assets. For an industry based on sustainability, it is important to understand the need for solar panel recycling. Many producers in the US have already installed recycling plants for solar panels, and the market need for recyclers will increase in the next few years.

The Life of Solar Panel Systems

As mentioned earlier, the life of a solar panel module is around 20 to 25 years. During this time, you can expect a 20% decrease in power capacity.

The majority of manufacturers guarantee that within the first 10 years, a 10% decrease in efficiency can be expected, followed by another 10% decrease after 15 more years.

Despite this guarantee, many solar panel systems can work for 30/40 years or more but with reduced efficacy.

The Advantages of Solar Waste Management

Solar waste management, the process of disposing raw materials from solar panels safely, has a number of benefits:

The Process of Recycling Solar Panels

This section will shed light on the methods and processes involved in recycling solar panels. The process is rather tedious and requires advanced machinery.

However, many new companies, dedicated solely to recycling solar panels, have been emerging. More innovation and technology are predicted in the future, which will make the recycling process quicker and more seamless.

Before we talk about recycling solar panels, let’s take a look at how manufacturers make them and what they contain to understand the recycling process better.

Solar panels, also known as photovoltaic panels (PV panels), are made of silicon or thin-film:

The recycling process begins by disassembling the solar panels and separating the glass and aluminum parts.

First, the recycler removes the aluminum frame. Then the glass parts are extracted. About 95% of the glass is reusable, while manufacturers can use all the metal parts to produce new solar panels.

Whatever parts of the solar panel remain are then exposed to thermal heating. This process leaves the silicon particles ready for further processing.

After thermal heating, the recycler removes the frame and etches away the silicon wafers on the panels by using an acid. Then they melt these broken wafers and use them again for manufacturing solar panels.

All in all, about 96% of the total components inside a silicon solar panel can be recycled through this process.

The first step involves removing the aluminum frames from the solar panels.

The second step entails putting the solar panels through a shredder, and then through a hammer mill. Recyclers carry out these procedures to ensure that no particle is bigger than 4 to 5 millimeters.

The substance that remains after the first 2 steps contains liquid and solid particle materials.

A rotating screw is utilized to separate these, which helps to keep the solid particles moving while the liquid drips down from the container. The liquid substance goes through its own precipitation process to ensure purity.

This process leaves behind 95% of semiconductor liquid, which manufacturers then use for the processing of metals in solar panels.

On the other hand, an interlayer material contaminates the solid particles. Recyclers then use vibrations to remove these particles. The resulting materials go through rinsing, leaving behind pure glass.

From this solar panel recycling process, producers can use 90% of the glass extracted for further manufacturing of solar panels.

Solar panel recycling, unfortunately, is not as common as it should be.

This is because solar panel technology is a relatively new field, and most solar panels have only just been introduced (approximately ten years ago). Considering the fact that they have an average lifespan of 20 to 25 years, very few solar panels have reached the end of their lifecycles as of today.

Cost remains a big barrier in the recycling process. Cost consideration is very important because photovoltaic compete with other traditional sources of energy on the basis of price. Manufacturers cannot absorb additional recycling costs into the price of the panels since doing so will decrease demand.

China has taken the lead in producing inexpensive PV panels and suppressing profit margins, so manufacturers in the US are facing pressure to keep their costs down.

Solar recycling is not the only industry that is developing drastically. Researchers are also making new inventions in solar panel technology itself. So if they develop a new type of panel, manufacturers will have to come up with another recycling process for it.

For example, organics and perovskites are fairly new types of PV panels that make use of more exotic raw materials for which the industry has not established recycling methods yet.

There are currently no laws in the US that govern the recycling procedures of solar panel systems.

However, the Solar Energy Industries of America (SEIA) has developed a recycling program in partnership with First Solar, Cleanlites Recycling, and Green Century Recycling.

This program aggregates the products and services provided by PV manufacturers and recycling vendors to implement an environment-friendly and cost-effective way to recycle solar panels.

Unless the government develops further regulations, the industry will not be motivated to cultivate improved solar panel recycling methods. The existing methods that recyclers are using in the US are quite expensive and will need further development as solar waste increases in the years to come.

The long-term success of the solar panel recycling industry depends on the ease with which raw materials can be extracted and reused in the manufacturing processes.

For solar companies to thrive in the years to come, they must ensure that solar panel modules are disposed of correctly and are not dumped into landfills.

I think it’s safe to say that we can all agree the world needs to be more sustainable. There are different ways one can contribute to making the world a better place, for example; recycling, learning about our Earth, and trying to minimize your carbon footprint.

We believe that solar panels should be encouraged amongst residents to help save energy used in homes.