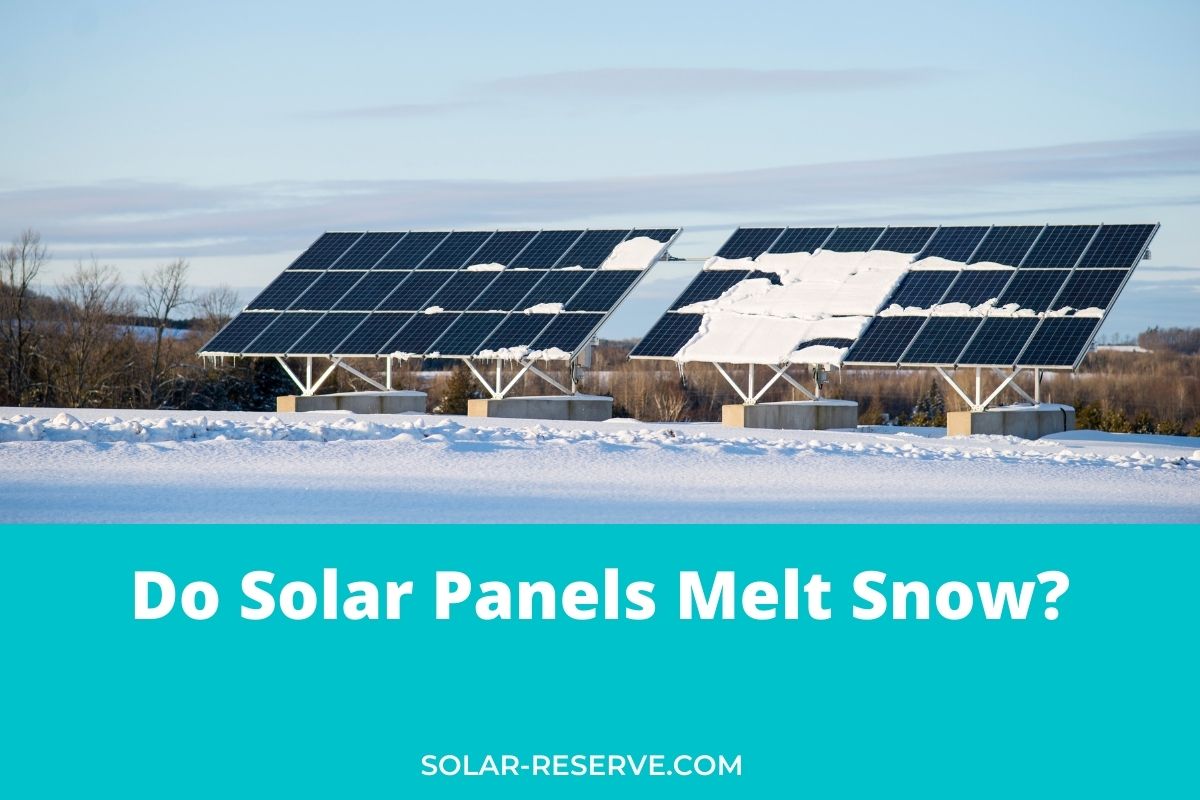 The winter can be a difficult season for solar panels. The snow covering your panels can be quite annoying. If you live in a snowy area and planning to go solar, it’s important to know how snow affects your system. For those who’re wondering whether or not solar panels melt snow, this article is for you. Let’s find out.

Typical solar panels do not melt snow by themselves. Most of the snow, in that case, needs to be removed manually. However, some solar technology companies are developing systems that use energy and heat to melt the snow.

These systems might not be for everyone, though, as they can be very expensive. For normal households, in most cases, it might not even be worth it to worry about the snow. But there are other ways you can deal with and clean the snow off of your panels.

Contents hide
How Does Snow Impact The Solar Panel’s Efficiency?
Do Solar Panels Melt Snow?
The Advantages Of Innos Snow Removal System
How Do You Safely Get Rid Of The Snow Yourself?
Wrapping Up

How Does Snow Impact The Solar Panel’s Efficiency?

Okay, before getting into the meat of the article, let’s first discuss how snow affects solar panels. Does it? In simple words, yes! When you have a thick layer of snow on your solar panels, the performance can be compromised.

Since solar panels use sunlight to generate energy, the snow can block it out. This will cause the panels to not perform as expected. That being said, the impact is not as much as you would think. Overall, snow has a small impact on the energy production capacity of your solar panels.

Your panels will work the most during the summer. And this is where you need to know about net metering. In the summer, it is not uncommon to see solar panels producing more energy than you can reasonably consume.

Here is the cool bit: you can also send this excess energy back to the power grid. And you can also be compensated for it. This is, however, if your utility supports net metering in the first place.

So, yes, some snow might affect the performance and the ability to use the sunlight from your solar panels. But the impact is not that extensive either. Plus, you do not need to rely only on solar power to offset the bills.

Let’s answer the question that is on everyone’s mind. Do solar panels melt snow? The answer is a bit tricky. Normal solar panels that you would get installed by a technician, do not have any specific feature that helps them melt the snow.

The snow tends to just melt away from the natural heat, eventually. But there is a caveat to that. I said solar panels do not have any special tools or technology that help them. Guess what? There is some technology that has already been developed that can melt snow.

Innos, which is a Norwegian-based technology company, claims to have developed a system to melt the snow. The system acts as a weight-monitoring one. The idea here is to use module surfaces to melt the snow. This will help avoid any kind of unsafe load on the panels.

The goal here is important. It was built to avoid any extra load on the panels since a layer of thick snow can be quite heavy. However, it is not designed in a way to ensure solar panels work efficiently. Well, I guess you can make it work for both cases.

When the snow clears up, the panels might start working a bit more efficiently. But that is more of a by-product of the weight monitoring system. The impressive part is that it can melt about 2 kg of snow per sq meter in an hour.

It is done by pushing current through the solar panels to heat them. The Innos CEO mentioned, however, that the challenge is regulating or trying to control the current that is being circulated or pumped in.

The solution Innos came up with is pretty cool. They are using a control system that measures the density of the snow. This system is connected to a maneuver system linked with DC power supplies.

The power supply units are then connected to the solar panels themselves. When the PV panels are covered with snow, they can pump power into them to get rid of the snow, which will melt them without damaging the panels themselves.

There are some optimizations needed. You need to ensure that you run low current through it. This will help keep operational costs minimal. And, of course, when the snow is all melted, the panels can start generating energy as well.

Are there any obvious advantages to this system from the guys over at Innos? Actually, there are! The most impressive thing about it is that it lets households and other businesses save money on snow removal costs.

If these systems were installed in places where there was heavy snowfall all the time, you would be able to lower the snow removal costs. It can be a good business investment. Most solar panels for households are installed on the roof.

If you were to clean the snow, one way would be for you to physically get on the roof and clean it. Either this or you can wait for the snow to naturally melt away or fall off. However, with the system Innos developed, you do not need to get up on the roof.

Not only can it be very dangerous for you, but it can also damage the house. Some old homes with not-so-sturdy roofs can now have solar panels installed since there is no need to clean them by climbing the roof. The system will practically take care of it when it snows.

However, there are some things you need to know. You cannot just go ahead and get this system installed on every snow-covered solar panel you see. The module manufacturer needs to permit this to be installed.

That is because the panel’s warranty might be voided. However, Innos has been collaborating with some of the leading panel manufacturers to test the lifetime operational opportunities for it. Heating the snow presents the chance of the melted snow damaging the water-resistant properties of the panels themselves.

Going out and ordering the system may not always be cost-effective for everyone, whether they are a typical household or a business. That is because it can be quite costly.

Innos says that the cost associated with a system like this can be borne by companies. So, what do you do if you are just a single household looking to get rid of the snow on your solar panel?

How Do You Safely Get Rid Of The Snow Yourself?

So the space-age snow melting technology is not affordable, to say the least. So, what do you do when there is a ton of snow on your solar panels? Do you get up on your roof and brush it away?

Absolutely not! Climbing up on the roof of your house to clean the solar panels can be very dangerous. It is not worth it, given how much snow can impact the solar panel’s performance in most cases.

What you should be doing is buying the appropriate tools to clean the snow off of the roof of your house. If your panels are installed on the roof, you can easily use something like a snow-cleaning rake to clean them.

Make sure the rake you buy is designed to clean the solar panels. You do not want to scratch the panels, no matter what. Roof rakes with some kind of foam or very soft brush bristles at the end. But some kind of rake with a foam head is recommended.

The idea here is to use something that will not damage the panels themselves. If your panels are mounted on the ground, then the work is much easier for you. You can simply buy some snow cleaning brushes (again with very soft bristles that won’t damage the panel).

Remember that safety always comes first. You should never climb your roof to clean the snow. It can be very dangerous, and it is not worth it. If you do need someone to climb the roofs and clean massive piles of snow, it is always best to call a professional in that case.

Do solar panels melt snow then? Normal ones do not. You need to use a separate system to run energy through the panels safely to melt the snow. An investment like this might not be viable for the majority of users, except for large companies. In most cases, households can use tools and normal brushes to get rid of the snow manually.

Floating Solar Panels: Everything You Need To Know